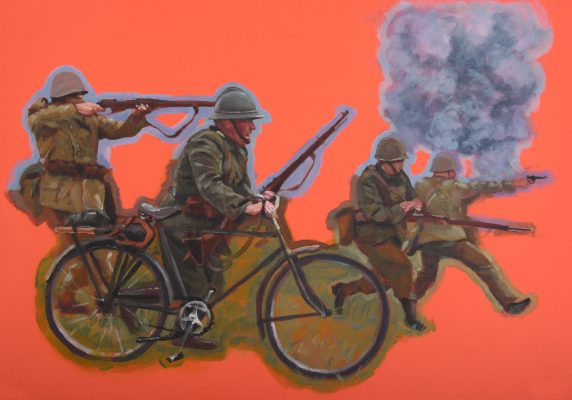 “Reenacted Realism” is a series of small acrylic paintings on colored paper. The images are details fragmented from photographs taken at historical reenactments, the kind that seldom happen throughout the world, but naturally more often in the west, at anniversaries. These events that pretend to replay a historical moment are a kind of performance or theatre that has no other script but that of repeating that which has happened years or centuries ago. Seen as anachronic or quixotic scenes, they contain a pictorial potential not only because painting (especially figurative painting) appears just as anachronistic in front of new media in visual art, but also because an important genre of painting was the historical one, which professed the recounting of grand historical narratives or their importation from antiquity. This series of works aims to somehow recycle figurative painting and the historical tableau, which has a long tradition in Albanian art of the 20th century. Regardless, it seeks to bring forth
the politicization and its productive filters as much as its consumerist or entertainment features that the process through which it takes form makes apparent
More information: exhibition@gallery70.art – WhatsApp 0692041859

For journalist and Media: press@gallery70.art

For exhibitions visits by appointments: exhibition@gallery70.art