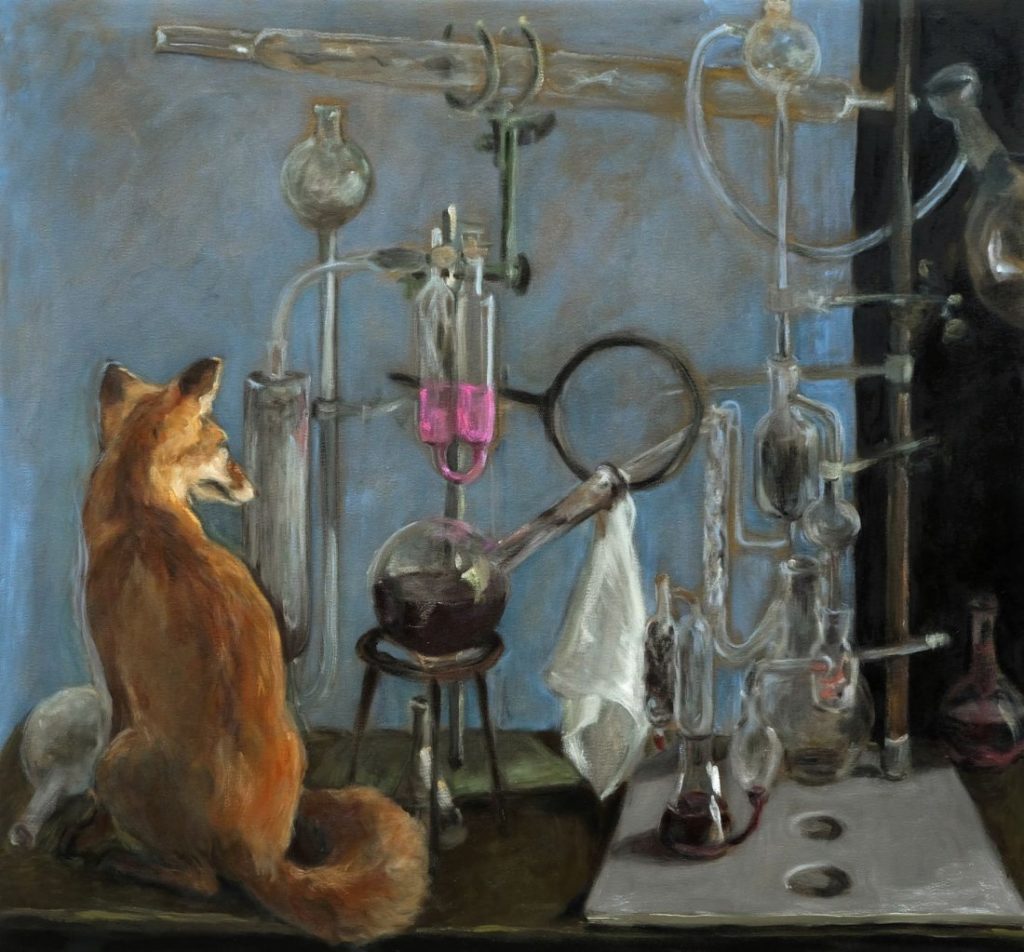 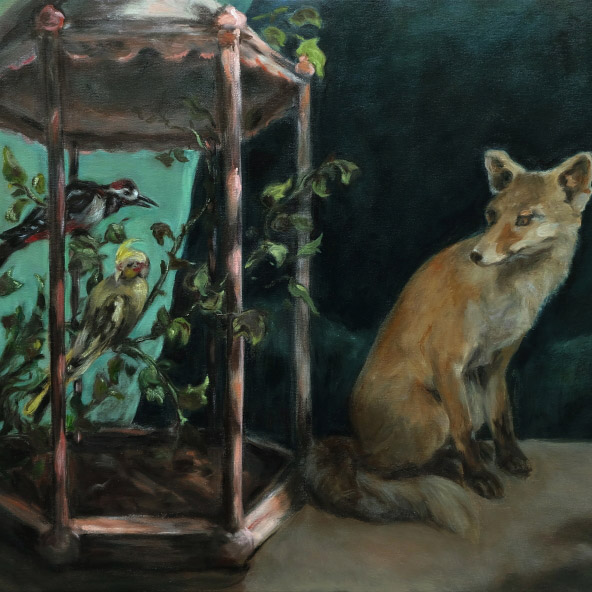 “Quite normal things and pieces of scenery were concerted in ever changing compositions, ordered in tonal values, in a sometimes semi-dark room, that is ruminant, aesthetical, without further perspective statement.”

The still-lifes of  Petra Rintelen show fruits, animals, flowers, skulls, dishes, vases and other objects. Since centuries this genre exists, like in the paintings by Georg Flegel up to Otto Scholderer. The well-arranged compositions presented seashells, beetles and food in a light corner, an exclusive part of daylife, decorating the dining-room, masterly executed, arresting attention. The paintings of Petra Rintelen arise from some other mind-set. Quite normal things and pieces of scenery were concerted in ever changing compositions, ordered in tonal values, in a sometimes semi-dark room, that is ruminant, aesthetical, without further perspective statement. Often her settings are apparently visited, used or observed, by a fox, a magpie or a band of lemurs. So the paintings achieve another dimension, like a poem, in order to win this absoluteness, the essence. Through cutting the objects, unclear conditions of space and cause, she is leading the spectator beyond sensual perception. In moving the objects or the protagonists away from the chaining middles of the canvas, she is creating a consciousness for the perpetual „over“. By the slipping away of all ephemeral, she discovers meaning owing to beauty, lays open the deceiving appearance and the vanity of life. We will already find Jean Baptiste Siméon Chardin discreetly entering this intellectual dimension, who captured in his still-lifes the objects in the charm of light and colour for the following generations up to Petra Rintelen. But, rarely another follower succeeded like her in creating such a metamorphosis to construe existence, such perceptible, pure and vivid sense beyond her motif.

Petra Rintelen graduated at the Academy of Fine Arts Enschede in the Netherlands in 1997. On the late 90‘s Rintelen turned to surrealistic motifs . Over the last 20 years Rintelen created a quite individual world of expression based on a painting space that is strongly restricted, where she deals with rather cryptic, apparently symbolical scenes. The artist often applies still-life as a stage for various animals of sometimes traditionally meaningful character. 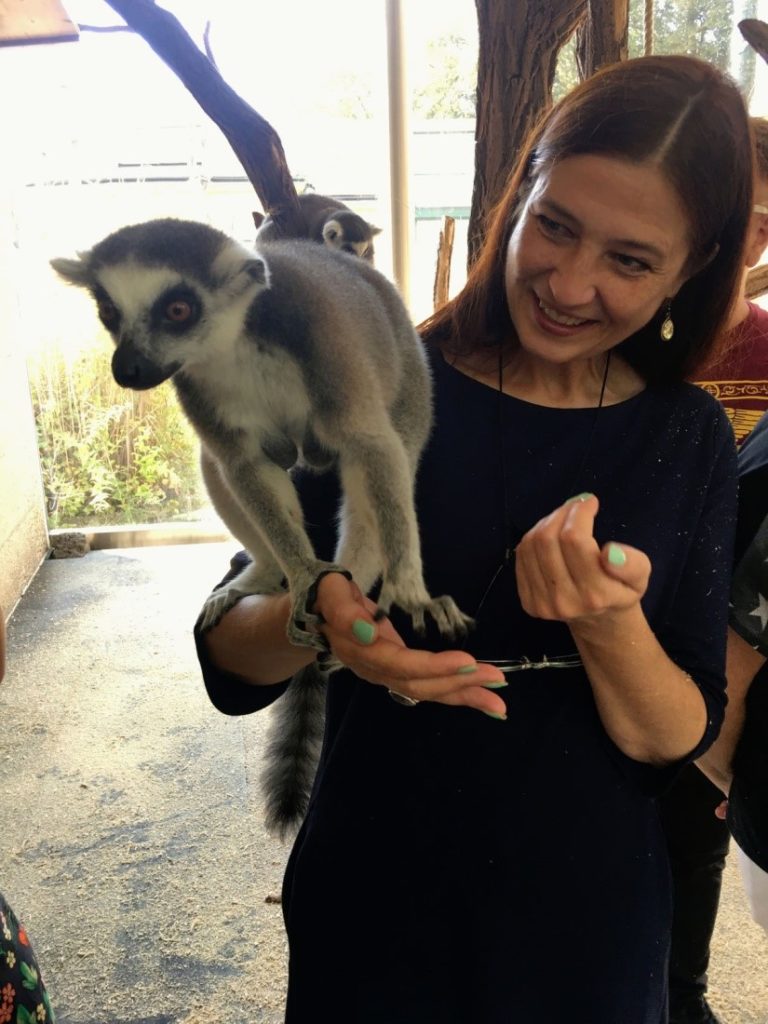 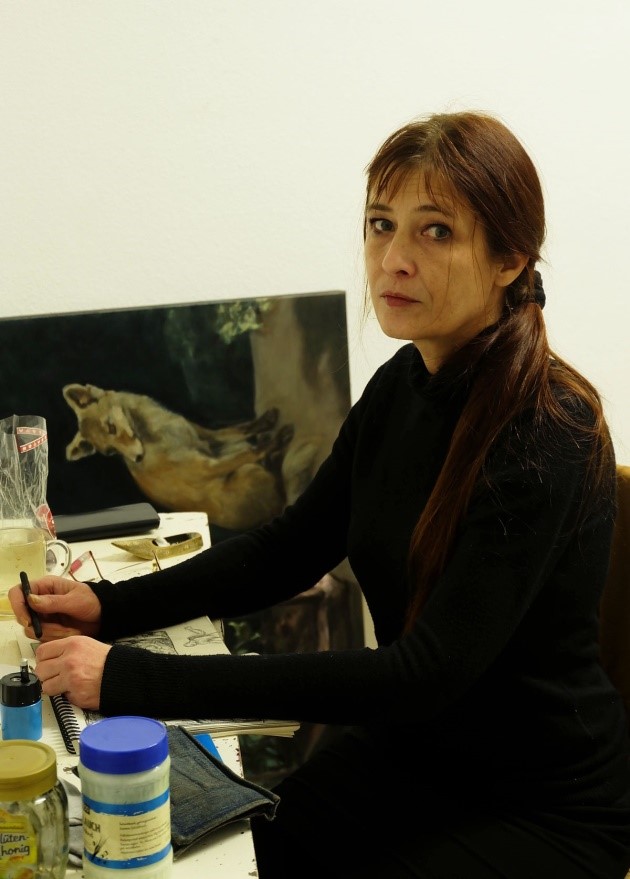 “Petra Rintelen’s still lifes do not make a metaphorical reference to moral values, but rather reify the plot and its “actors” in a significant prop. In a pointed way, the artist combines the emblematic reference function of early Baroque still lifes with the tendencies towards the “fetishization” of the object that have been observed since the beginning of the 19th century, which regard the inanimate object as a significant relic of an individual or a group.” extract Prof. Klaus Hammer 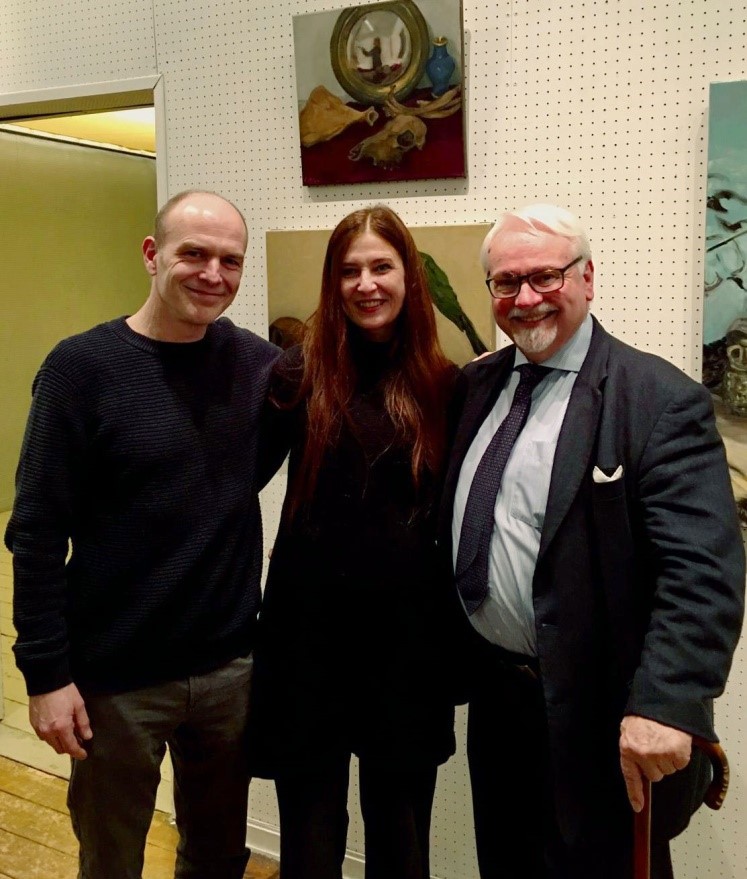 In conversation with Petra

G70 Did you dream to become an artist as a child ?

PR -As a child I always painted, I even remember some impressions of me sitting in the kindergarden painting at a table. I yet remember the smell of the pencils. Well I believe what I wanted to become was painter or researcher.

G70 Who or what inspired you to be an artist ?

PR -Nature! And my grandfather, because he always taught me to see the plants, the animals, to learn about nature and to observe.

G70 I get a theatrical feeling looking at your artworks. How do you create this very special atmosphere?

PR – I think it has a lot to do with the conduct of the light, and actually I often create a set of things on a table or elsewhere and try a lot in which corner of the studio I get the best illumination by the daylight, the most intimate or slightly dramatic light. That depends on my motif and how I want to make this little „stage“. 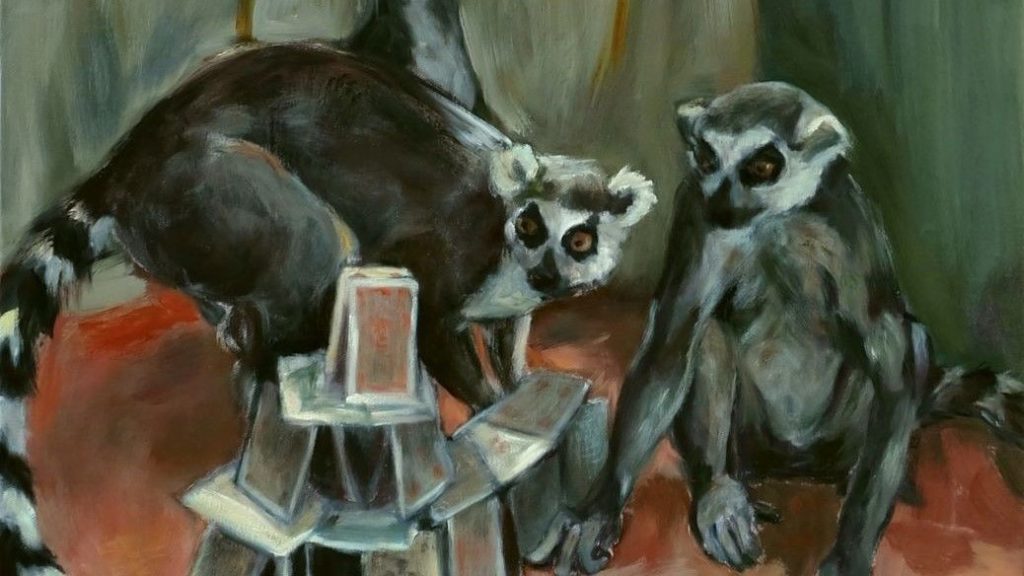 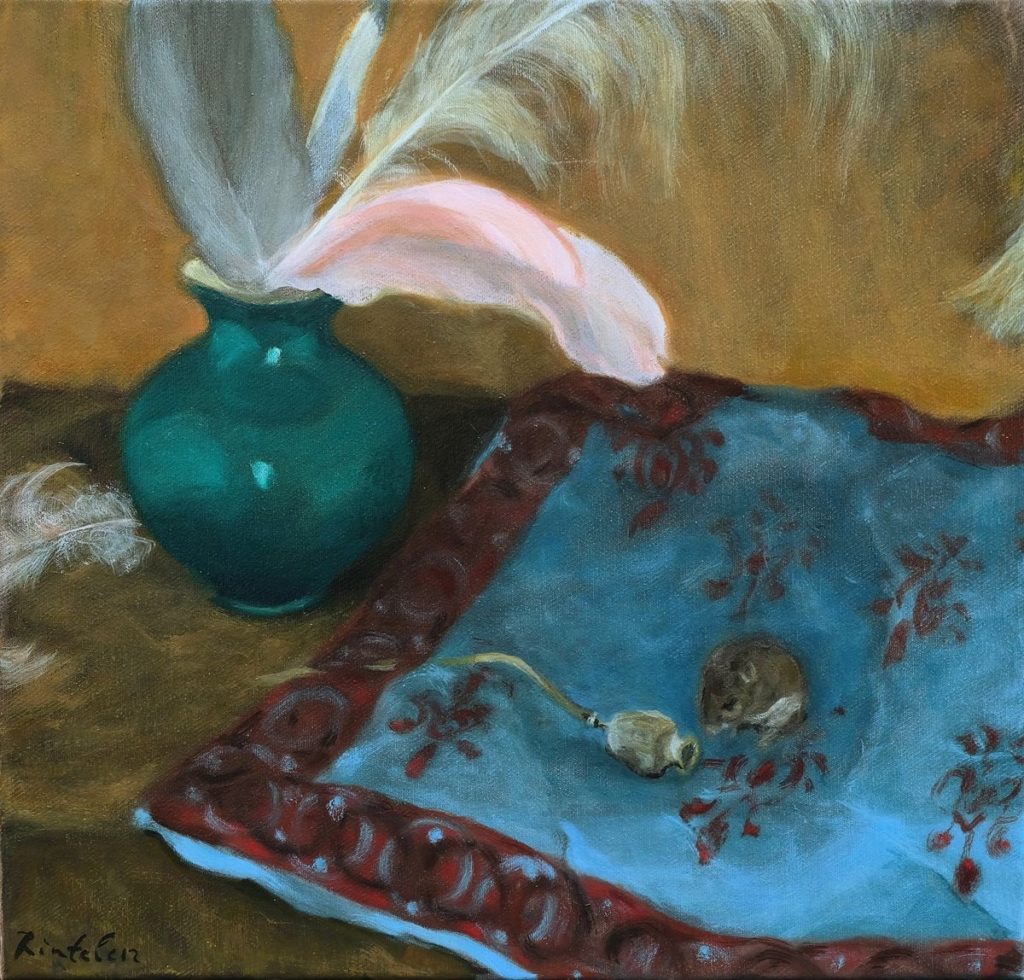 G70 How do you think Covid has impacted your work ?

PR Well to be honest, I couldn‘t say that Covid really changed my working. In my work I‘m in my work. It changed rather the circumstances of life generally, to meet rather few people, to see my exhibition shut down prematurely, not to embrace people. But I take this virus quite seriously and I wish this disease on nobody, myself included.