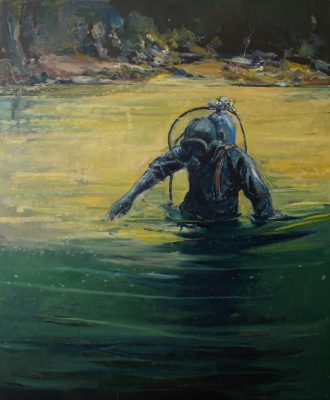 The paintings represented in the cycle “Between Darkness and Light” are focused in a figure which is human and alien as well. A diver dressed in a diving suit appears in the shallow of a river or a sea side in the sequences of his walking out of the water. He stands alone as a sole character of the big landscapes, while the little ones are restrained in his portrait (if we call refer to the spacesuit as a portrait in this case, an element which covers his entire human aspect).
This kind of figure would be a perfect event to paint since it guides the viewer towards the two halves that need to be merged. He is half outside and half inside the water (two different kinds of worlds) and half human and half technological because of his special outfit which facilitates his being under the water and makes him a stranger to the opposite world (above the water). His mission is to pull from the unseen world certain “objects” and display them in the opposite world’s light.
Orion Shima is born in 1969 Tirana, Albania where graduated in 1993 from the Arts Academy, Painting Department. He has an exiting track record of collective and solo exhibitions, in Albania, Italy, Greece, Germany, USA etc. To discover more about the artist visit http://www.orionshima.com
Solo Exhibitions