A photo exhibition in ‘Gallery’ 70 which brings an unknown dimension of the artist, a slightly unique but also personal perspective that presents the beginning and the end within an aquarium called Life … 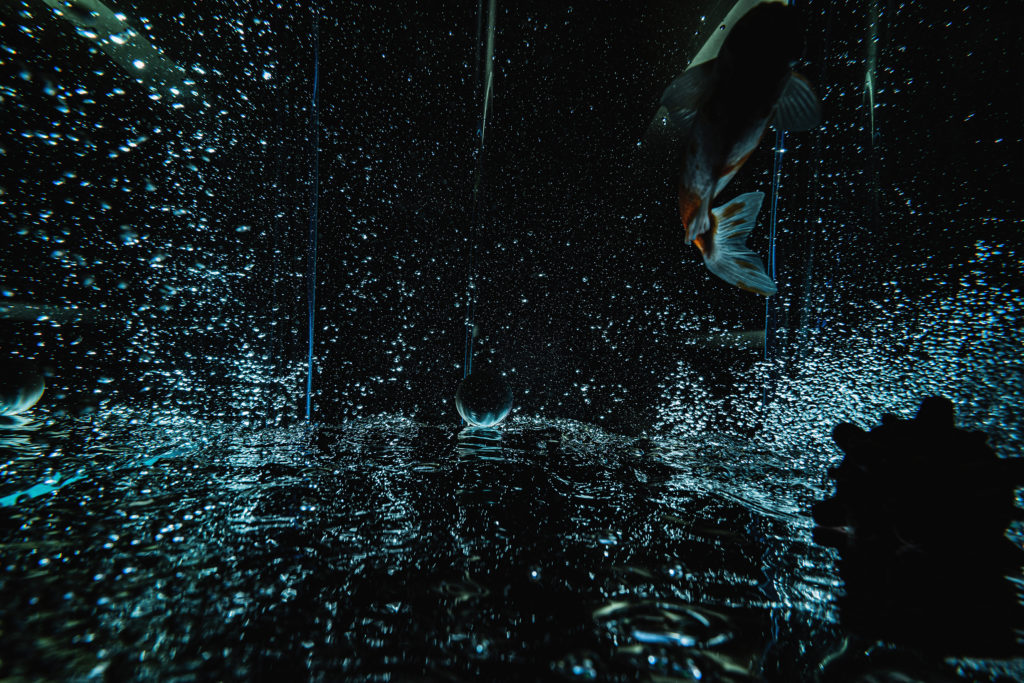 Black and white has always been his strong side, but this time the photographer brings a completely original concept, life on its two ends, birth and death, all in a universe created by Ergys Zhabjaku, inside an aquarium, where one can clearly  see a parallel world. The exhibition comes in “Gallery’ 70” and presents another dimension of the artist’s spiritual concept. He manages to create  with just one camera click an entire universe where we can see our lives frozen, the long-awaited beginning  and the unwanted end, with the shadows that surround humanity. The other great achievement is that every photo exhibited  is produced  without digital manipulation. It is the result of the deep knowledge  of the use of the magical effects of light …!

RB – What inspired you for your photo exhibition?

EZH – The exhibition is a follow up of the previous one. I have been dealing with this concept  for some time and looking back at previous projects, it makes quite a difference. Two years ago I was no longer happy with what I was doing, I was thinking of doing something else. I entered this somehow imaginary world, being inspired by the circumstances. The exhibition talks about the beginning and the end, because if you go to the beginning you will find the end. So when I started , it was a little weird, because to me it’s like a very personal ‘Big Bang’. I called the exhibition ‘ Fish Tank’ because I took photos inside an aquarium, where each photo has its own story. The main image is printed in a very large format, and as soon as you see it , it is like perceiving an entire  universe where the water bulbs  resemble to the planets …

RB Looking at the photographs  you enter a mysterious world, as if you were  discovering  something in it….

EZH -I have become more existentialist. I like to convey the relation of the creature  with universe, with time, with death. Usually people are afraid to talk about these themes and keep holding back. I didn’t  want either initially, but I started scratching these themes little by little. I’m continuing to deepen inside but not because I am afraid of death, but because I find  the chaos, and the panic of the end  somehow absurd . The beginning and the end are two moments of life where man is powerless to decide.

RB -There are many artists dealing with this topic, what is different with you ?

EZH I believe  that my subjects are  something different. The presence of water is special because water is the beginning of everything: life, its end, the whole revolution is born and will end in the water. Water is a primary element in creating life. Dehydration is the best parallel to the absence of life, and  I started this theme with my previous exhibition “Running out of water”, to follow up with this again.

RB- The feeling of water is universal, but also a bit personal?

EZH Yes, because when we first see the sea we create a very personal relationship with it. As kids, we are very  impressed by the sea. It’s a big thing that moves and has life. We perceive that water has life, unlike mountains. There is no life in them. There are many myths related to fish. One tradition says that a big fish holds the whole universe. This is probably the reason why many of us have always had aquariums with fishes at home.  Looking at all  these elements, it doesn’t  matter when you  start the project, what matters is that you perceive signals  leading you  to the final project, which can become even more spiritual than the present.

RB Was it technically difficult?

EZH It was not difficult. I took the first picture with natural light, then the next one with flash and everything came out as I wanted it. Then I installed  two flashes because I needed more light for the water bulbs  and the picture was perfect. The photos are original, no effects, no crops, no manipulation. They are pure natural photos. When the artist decides to start his imaginary trip , he must know well the  instrument that he owns, and in my case, it is the camera. You don’t start creating thinking that you can fix things later. You capture the photo properly from the beginning.

BORDO is one of the major magazines dedicated to art, fashion, lifestyle and career. Published bimonthly . 150 pages. Since 2015.