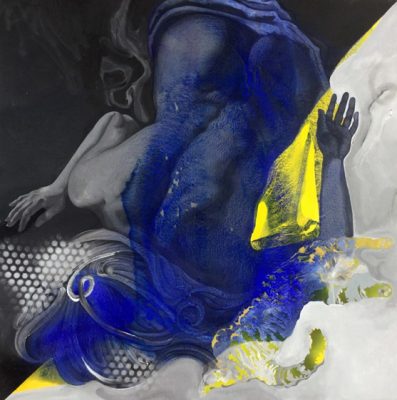 The exhibition brought by Joni KRAJA in Gallery 70 includes 5 large-format works presented to the public for the first time and belonging to the period 2013 – 2017. An interpretation of Hayez Meditation and four compositions are displayed on the walls of the gallery in an unconventional narrative breaking the academic rules of distance and space. It looks like an artistically cured storyboard that deforms boundaries between canvas, and just as a living picture, events and characters overlap chaotically merging into a single image.

Expressive and powerful paintings, with texture, game of lights, intensive colors and nervous paintbrushes; the human figures in black and white sound unfinished; a spontaneous, impulsive, organic stain flows over the canvas and covers the human figures melting with the space, as a symbol of life when unexpected events surprise us at the most unexpected moments; a diagonal dark shape with straight and clear cuts, drawn across the canvas, looks like the visual synonym of the umbilical cord that connects reality to dream, life to death, present to the beyond .

Anxiety, fear of living in an unknown and hostile universe, are said to relate to feelings of powerlessness, self-deceitfulness, and escape from reality, but how valid is this judgment when we view these compositions? “A painting never ends as long as I breathe,” says the author.

“Jon Krajas’s figures are both brutal and soft, casual and elegant, and the exhibition is like a romantic thriller that creates internal confusion as if you were facing a passionate crime. A physical approximation to the truth of life, but not because the artist wants to present a natural object in its own embodiment, not because he wants to give the illusion of a living body, but because he is impassioned by the beauty deriving from the organic form that dominates entirely the strength of his artistic will, ” says Ardian Lama

Jon Kraja is born in 1970 in Tirana, Albania where graduated from the Arts Academy. He has developed an original style mostly based on autodidact research. His works are featured in collective and personal exhibitions, both in Albania and abroad: Switzerland, Germany, USA, France and Netherlands .To discover more about the artist http://jonikraja.com