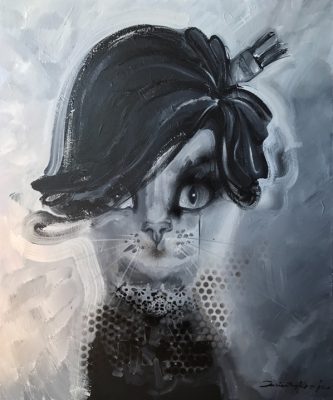 ..Adorable, with a perfect attitude, with a courageous and challenging independence, with a manipulative intelligence and a pragmatic selfishness, looking beautiful to perfection, she was back. I got up, opened a box of sardines and let her taste it in silence . Then I sat down again , staring at her happily. An expression came to my mind “curiosity killed the cat” …extract from the notes of the artist
#Admiration# Attitude #Beauty #Courage # Behavior #Independence # intelligence # love# manipulation #philosophy #practicality #selfishness

Something about cats : Cats are the best studio friends . They closely and quietly observe and every now and then get in the middle of what the artist is working on.
Is it the independent nature of cats and the independence of artists that makes this obsession so perfect?
“The smallest feline is a masterpiece, “ wrote Leonardo da Vinci, whose drawing Study of Cat Movements and Positions testifies to his admiration for the animal’s flexibility. Cats have proliferated in art over centuries.
They became particularly popular as the cuddly familiars of females in paintings by Victorian artists and French Impressionists. Where ever there is art there must be cats. At the dawn of civilizations, the cat posed willingly as ancient Egyptians captured its noble feline features in sculpture and painting. Through the centuries, felines continued to grace the canvases of the greatest artists and today in the twenty-first century cats are no different. Whether viewed as a symbol or just a cuddly cute kitty, no one can deny the importance of cats in art.
Carl Jung would certainly agree that the cats is entwined within the collective human consciousness, and because of this, will endure and thrive by our side and in our art in the centuries to come.
The Cycle of artworks presented in Curiosity includes paintings, applied graphics, digitally manipulated artworks, and drawings. Jon Kraja sees the cat as a silent companion, the soul posing with stoicism for the portrait, and sometimes as a spirit multiplied in motion.
The classical and the contemporary, interact with each other, creating a multidimensional space where the pace of creation comes though the variety of brushstrokes, the graphic overlapping of the movements, the game of tonality and tones, the contrasts of lights and shades, the mystery of pixel, the everlasting white elegance of black and white, the arrogance of gold.

Jon Kraja is born in 1970 in Tirana, Albania where graduated from the Arts Academy. He has developed an original style mostly based on autodidact research. His works are featured in collective and personal exhibitions, both in Albania and abroad: Switzerland, Germany, USA, France and Netherlands .To discover more about the artist http://jonikraja.com