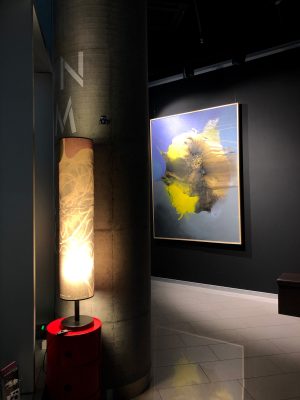 All I want for Christmas .. is the closing episode of the traveling exhibition of Jon Kraja . After Strasbourg and The Hague, the exhibition is presented in Gallery 70 Contemporary art in Tirana 07/12 >17/01/2019 . Two big format artworks are presented to the public for the first time. Join Suzana Kuka Varvarica in discovering Why “This is the end”!?
…Joni Kraja’s paintings titled “This is the end” are a set of two-dimensional illusory images that move, interact, shape and shadow an “other” world, reflect an “other” life where anyone can sail the anxiety or joy with the thoughts of sight. One of the statements of Jean Helion, the abstract French painter, that “… I understand abstract art as an effort to nourish imagination with a world built through the feelings of the eye” is completely related to each abstract artist, including Joni Kraja with “This is the end”. In these paintings Joni Kraja travels through the feelings of the eyes. He feels earlier reflections of the daily, which in the long run are inherited from the past. In an instant, filled with creative abilities and greatly disturbed by the effect of the expressive-abstract act, he manages to stop and paint a bold endless end. Although he is titling the cycle of his subliminal afflictions with the title “This is the end” he clearly reflects his experience of a single time segment in his own creativity and in no way its ending.
The analysis of the expression “This is the end”, broadly speaking, is the unbroken circle of human life experiences. It is the fatal expression, which calls for the end, as well as the optimistic expression of a new beginning. At this hot point, the individual notes, Joni Kraja’s massive paintings, who through the wonderful wandering of the colors put us to an end to see a new beginning. I would never feel “This is the end” as the painful pessimism of the artist or mine, the one or the other, because the artist has interpreted the image by creating the illusion and this shows that his mind is fertile and strong. Because I feel active and transformative looking at the image as an illusion of ideas; because someone feverishly calling from the title of the artworks is caught in the center of the attention and then loses the illusion that suggests the title. Because the universe will go to the end, when it has turned itself into a new being, meaning into a new illusion.